The Beginnings of a New Chapter

The shop is completely closed down and by the miraculous hand of God it closed with zero inventory left on hand. The shelves have been removed and now the room is a fully functioning quilt studio. I'm in love with my new room and I know I'll be in it as often as possible, quilting up a storm.

I've been doing the prep-work to begin my new chapter in quilting as a Fabric Sales Rep. which has been exciting and overwhelming all at the same time. It's amazing how much there is to remember. But I know I'm up to it, my husband describes me as "The Queen of Organization," which should help greatly with this new career.

I'm excited about the company I'm working for, the  Jaftex Corporation, is a fourth generation textile company dedicated to producing high quality fabrics, caring for their customers and best of all they are a family oriented company that wants those that work for them to have a life outside of work and stay connected with their families and friends.

Here are all the companies that are either owned or distributed by the Jaftex Corporation:

It truly is a privilege to work for such an amazing group of companies and I'm looking forward to diving into this career and giving it everything I've got.

I've even managed to design new business cards with a nice head shot that was taken at a recent military ball. Kind of impressed myself that I was able to turn the background from people standing around to a nice black background that actually worked. 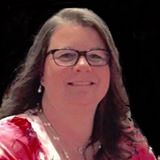 Posted by Little Pink Rose at 9:05 PM No comments:

Called By The Lord Your God 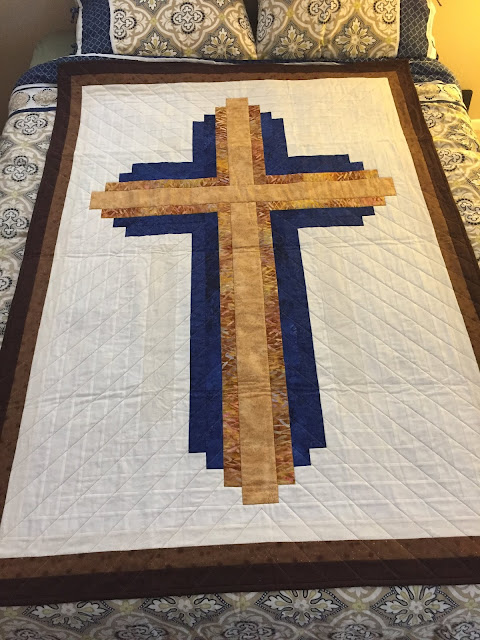 Last year at the end of March 2018 my sweet hubby and I had the privilege of flying to 29Palms, CA for the Constitution Ceremony of Pillar Church of 29Palms that our church had planted the previous year when three families were sent to the desert to plant said church.

My original intention was to create quilts to give to each of the families when they were sent off, but alas I had too many other obligations to meet that self-imposed deadline. After sending the families off, I immediately set a new goal of having all three quilts finished by the time the church was constituted, which was scheduled for May 2018.

But then God did a miraculous work. The church plant was growing so quickly they were ready to constitute much sooner than they had expected and they moved the ceremony to March and I panicked a bit, I hadn't started any of the quilts let alone picked out any of the fabric. Late-February I started digging through my stash picking out fabric. I finally started cutting out pieces February 27th.

Amazingly I had all three quilts finished and ready to pack by March 21, just a day or two before it was time to leave. Normally I'm finishing up those last stitches on the binding while we travel to our destination. But this time, by the grace of God I was finished and I could breathe a sigh of relief.

These three quilts were almost the only thing in my luggage. I wasn't about to send them through in a checked bag and risk the possibility of losing my luggage.

We flew into Las Vegas and our friends came to pick us up for the drive to 29 Palms.  Seeing the Grand Canyon from the air was pretty awe inspiring...now I just need to visit it from the ground someday. I can only imagine how amazing it is up close and personal.

We greatly enjoyed catching up with friends and hearing about the amazing work God was using them to do right there in the desert. What a blessing to be even a small part of their work and what an honor to be invited to be there for the Constitution Service of this new church.

After dinner one evening we finally had the opportunity to present all three families with their personal quilt made and prayed over with them in mind. 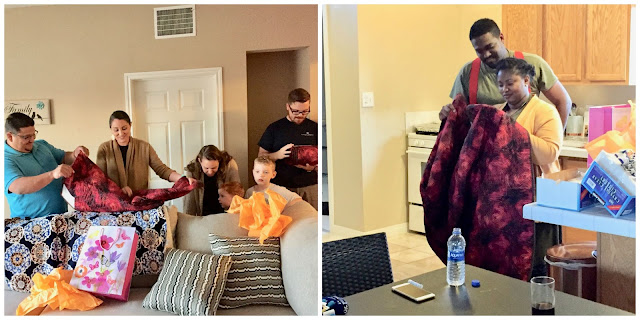 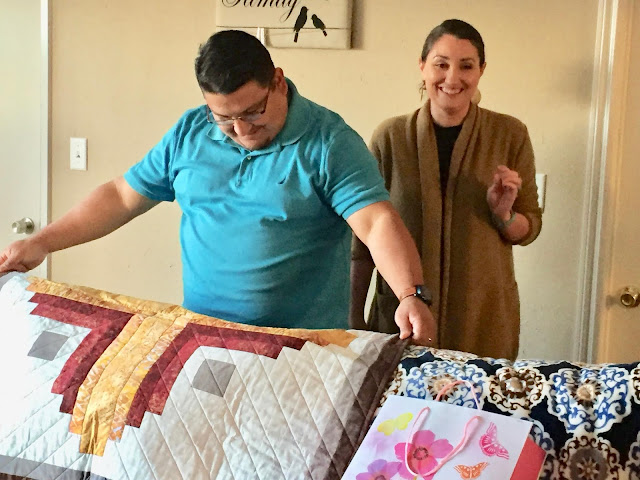 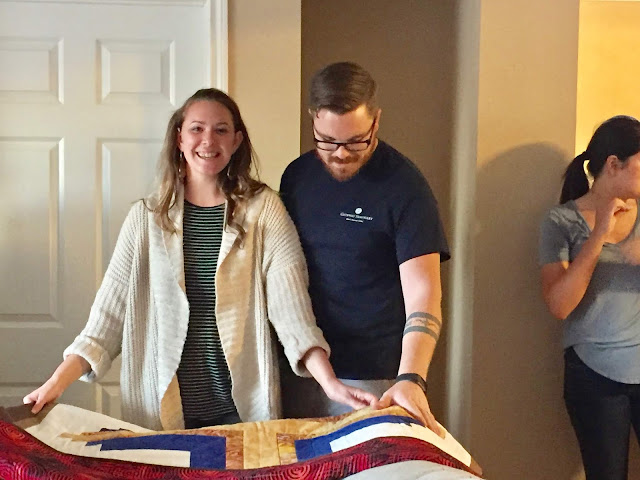 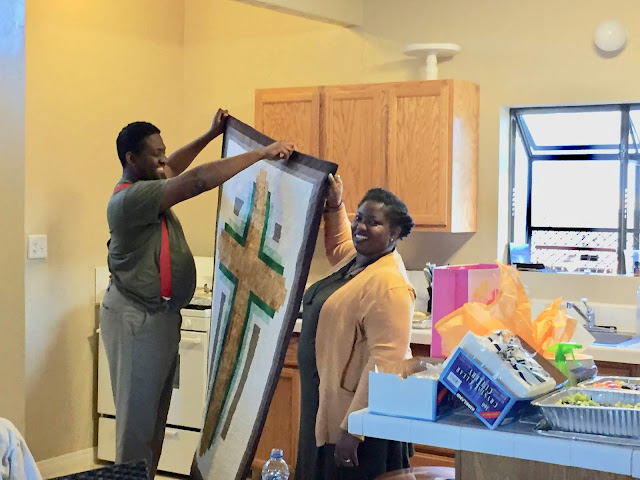 The crazy thing is I always worry that the recipients of the quilts I make won't like them. But gauging from the huge smiles and ohhhs and ahhhs we heard, I think it can safely be said that they were loved and appreciated. 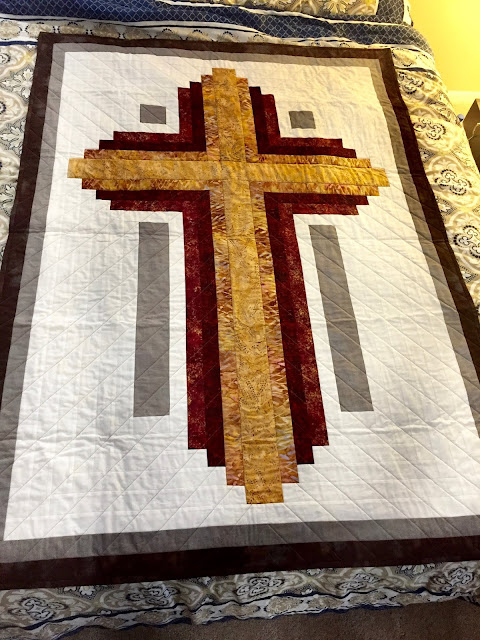 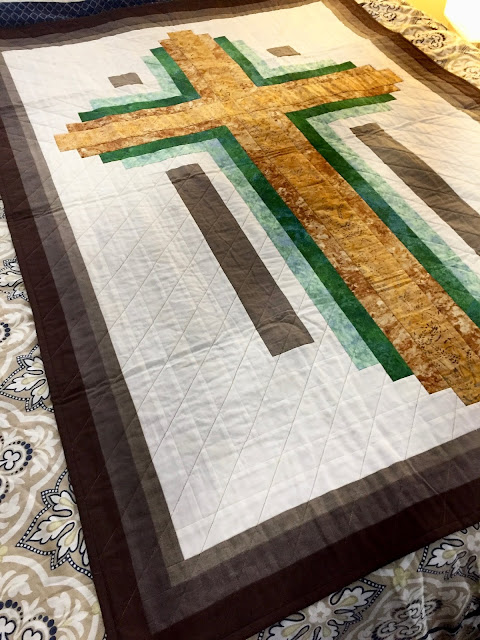 Before we headed back to Virginia we took a trip to Joshua Tree National Park for a short hike.
And much too quickly it was time to head back to Las Vegas for our flight home. We were on the road before sunrise which gave me the opportunity for some interesting silhouette shots as the sun came up.

Posted by Little Pink Rose at 11:10 PM No comments: 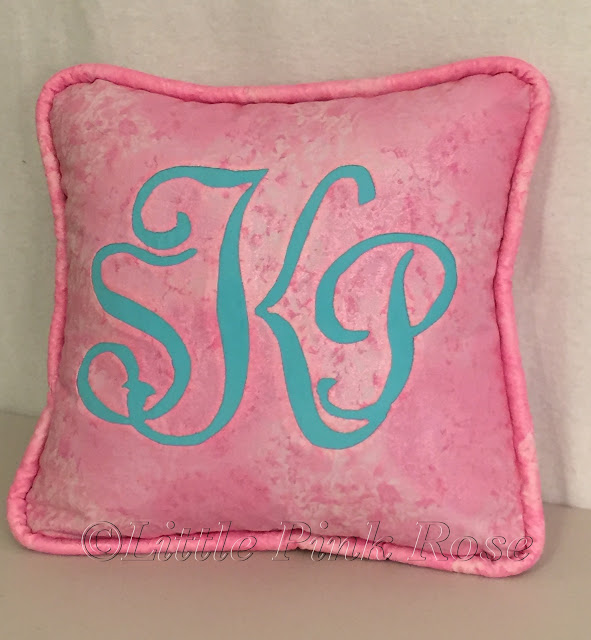 When I was asked to make a monogrammed pillow from a teal bridesmaid dress for an upcoming baby shower, I played with a few ideas of how to do the monogram. Reverse applique was the technique that gave the best results with the soft fabric. 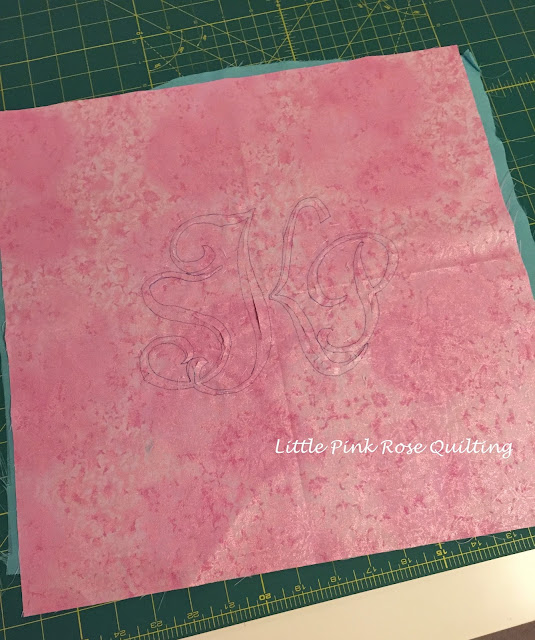 I used Michael Miller's Cotton Candy Fairy Frost cotton Fabric for the top overlay and fabric from the bridesmaid dress as the under layer. 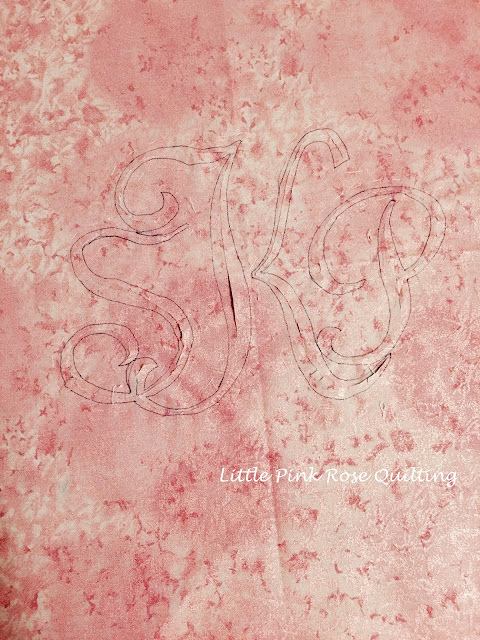 To create the Monogram I used Photoshop for Mac. After finding a font I liked I played around with the letters and how they connected to get the proportions. 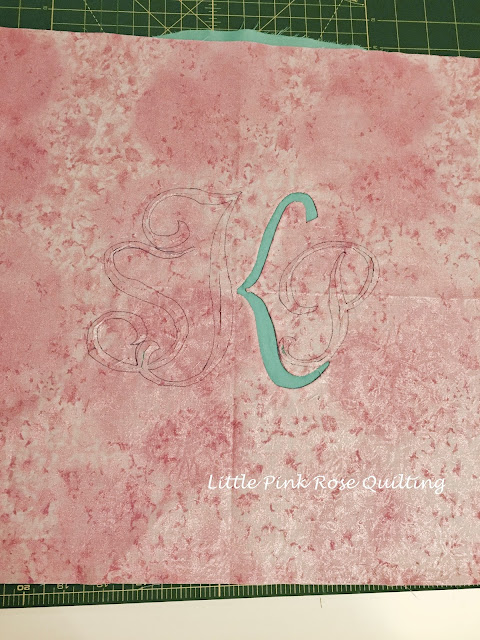 Once I was happy with the Monogram I printed it out and transferred it the the Fairy Frost fabric and basted the layers together near the monogram. 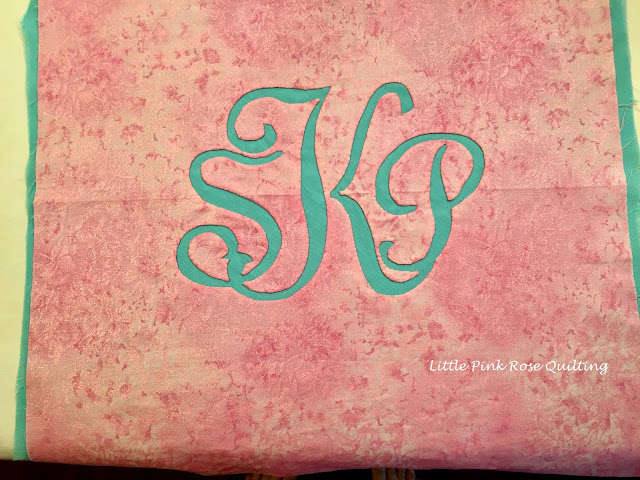 After carefully cutting only the top layer I began to needle turn the seam allowances using Wonderfil thread until the monogram was complete. 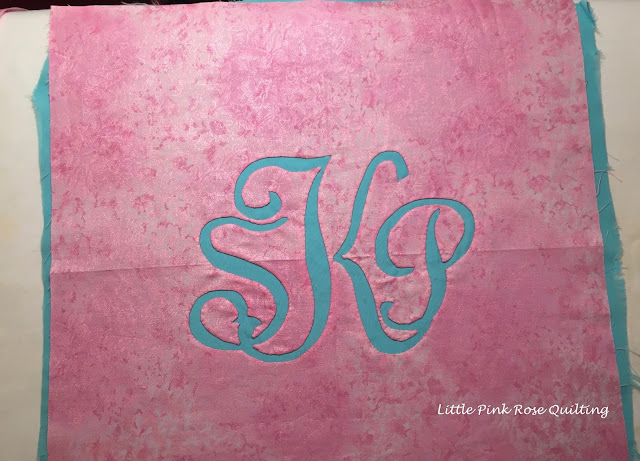 To give the pillow a more formal look I used cording with the pink Fairy Frost fabric to create piping for the pillow edge and butted the ends of the cording inside the fabric tube to complete the pillow. 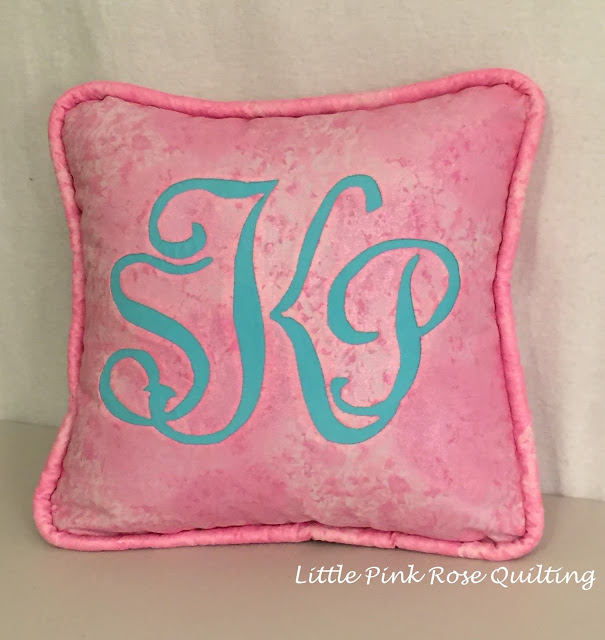 This project was a custom order from several years ago and I still just love the final outcome!

Posted by Little Pink Rose at 10:13 PM No comments:

Hi all! With the Royal Wedding happening today I thought I would share about the Royal Birthday Quilt I had the honor of helping to make for Her Majesty the Queen.


It all started when John J. Cole-Morgan of the U.K. was inspired to make a quilt for Her Majesty the Queen's 90th Birthday and he invited the members of his Beginner's Quilt Support Group (an International Group) to make a block or blocks for the quilt he had designed. The pattern is available on Craftsy.

The idea of being a part of an International quilt making project was irresistible, so of course I signed up to take on a block or two. John listed the blocks and and those of us making blocks to choose blocks we knew we could handle with our quilting experience.

I ended up with three blocks to make. We each purchased the fabric we needed, John's pattern from Craftsy and began our journey of creating out blocks. 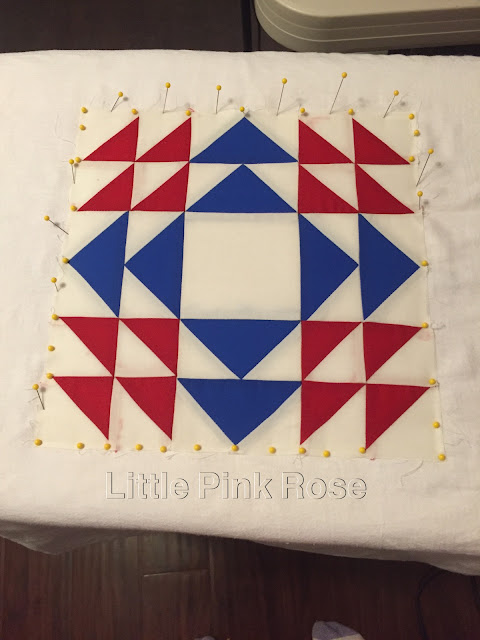 I had a little trouble getting this block to come out to the correct size so after making the block three times I decided blocking it, wetting it and pinning it to the board to dry, was the best solution. Thankfully this was the perfect solution! Success was at hand. 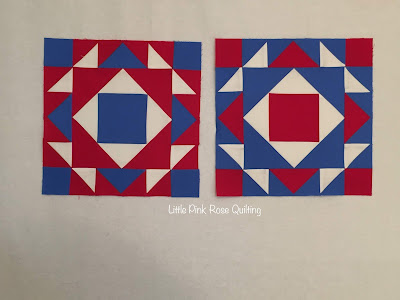 My other two blocks came together much better for me, no blocking was necessary.  Love it when a block comes together the way it's supposed to!! 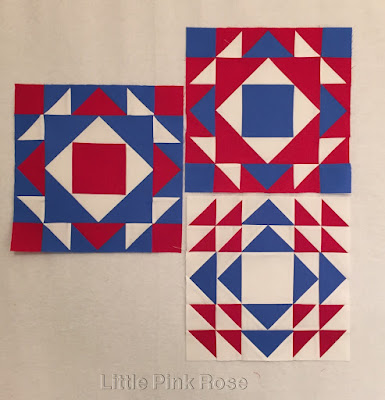 As we finished our blocks we started sending them off to John in the U.K.  and flooding his mailbox with packages from around the world. So much fun watching him post as the packages began arriving.
Thankfully John had a team of folks local to him to help him with organizing, layout and piecing.

Searching for my blocks in the whole quilt was extraordinarily fun! Found all three of mine circled in yellow.

John created a label for each person who contributed to the making of the quilt.

All the labels ready to become the backing of the quilt.

Before delivering the quilt to the Palace John entered it in The Festival of Quilts Competition for judging and feedback. The jury selected the quilt to be part of the competition. What an honor! 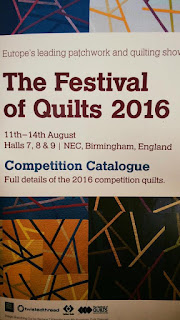 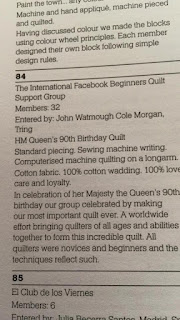 The quilt during set up at The Festival of Quilts 2016 in Birmingham, England.

Judges notes of our quilt. Great feedback for a quilt made by mostly beginner quilters from around the world. Job well done by all. 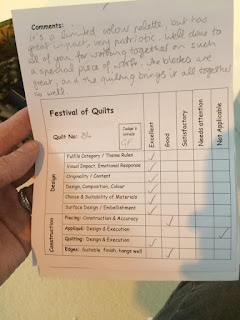 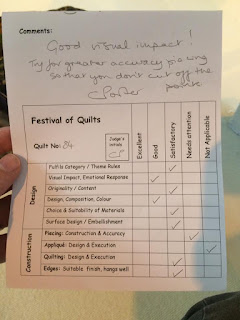 John and some of his U.K. team

Once John received official word from the Palace when he could bring the quilt to the Palace, a date he couldn't share with any of us, the excitement shared by this group of quilters around the world grew tremendously.  Once the quilt was delivered to the palace it became part of the Royal Collection.  We dream that it is a quilt that the HM the Queen has placed on her bed and slept beneath, but we will never know for sure.

It was truly an honor and a privilege to be a part of the making of such a magnificent quilt!

Little Pink Rose
Virginia, United States
My name is Marcia, aka The Little Pink Rose. I am a Christ Follower, Pastor's wife and mom to two wonderful young men. I am a passionate quilter with over 40 years of sewing and quilting experience. While I enjoy all aspects of quilting, I especially love Free Motion Quilting (FMQ) on my sit down machines. I greatly enjoy teaching other quilters how to use their home machines to quilt their quilts, spending time with fellow quilters, and learning new techniques. My quilting studio is truly my happy place. 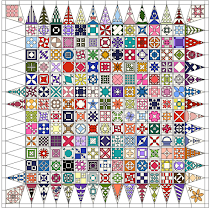 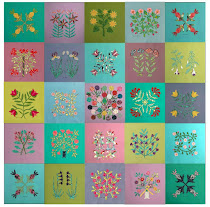 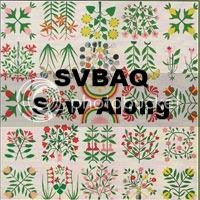